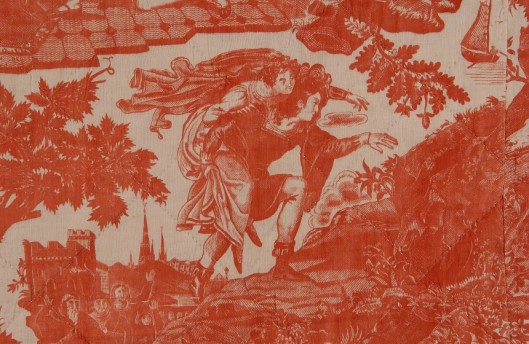 This work, printed on a white background, was printed by Narcisse Alexandre Buquet, the son of Alexandre Buquet, around 1830 at the workshop of Indienne manufacturer Henri in Maromme. It illustrates the knowing relationship that Rousseau maintained with this woman, a patron who housed and advised him in Annecy from the age of 16 years old.

The image depicts idyllic moments described by Rousseau in his autobiographical work Les confessions. The cherry picking scene is particularly recognisable. It shows a passage of Les confessions (Book IV, Chapter 6), in which Rousseau picks cherries with Miss Galley by Camille Roqueplan. Numerous prints reproduced this illustration of the young man picking cherries and dropping them into the cleavage of the young ladies. This scene, often referred to as the cherry idyll, is described by Rousseau as follows: “To keep our appetites in play, we went into the orchard, meaning to finish our dessert with cherries. I got into a tree, throwing them down bunches, from which they returned the stones through the branches. One time, Mademoiselle Galley, holding out her apron, and drawing back her head, stood so fair, and I took such good aim, that I dropped a bunch into her bosom. On her laughing, I said to myself.” We know of several versions of this painting, some bearing the signature and mark of the Henry factory, and others on which the Henry name has disappeared. This omission could mean that the painting was a major success and was therefore reprinted by another Indienne manufacturer, with Buquet maintaining ownership of his print.